Located on the Shonai Peninsula in Mitoyo, Kagawa, Mt. Shiude rewards those who travel off the beaten path.
Walk along the mountaintop path to the observation deck, where breathtaking views of the island-dotted
Seto Inland Sea spread before you and the outline of mainland Japan beckons in the distance.
Drenched in cherry blossoms during the Spring and dotted with hydrangeas in the Summer,
Mt. Shiude offers ever-changing scenery that delights year-round.

A Name with Legendary Origins

Mt. Shiude's name means "the mountain where purple clouds emerge" and originates from the Legend of Urashima Taro, a popular Japanese folktale. Many people believe that the legend took place on and around the Shonai Peninsula.
According to the story, Urashima Taro was a fisherman who saved a turtle. In return, the turtle carried him to a palace below the sea where he was entertained by a beautiful princess. Eventually, growing homesick, he told the princess of his desire to return to his home, so she sent him back after gifting him with a treasure box and a warning him that he must never open it. Urashima Taro returned to his village to find that many years had passed. Forgetting the princess's instructions, he opened the treasure box -allowing a cloud of smoke to escape- and found himself transformed into an old man.
It's said that when Urashima Taro opened the treasure box, the escaping smoke formed purple clouds which hung over the mountain that is now Mt. Shiude, giving it this name.

Recognized around the world
for unforgettable views and natural beauty.
Whatever the season, Mt. Shiude
reveals the splendor of the Setouchi.

Located just off the primary parking lot. Get a gorgeous view of Awashima and other islands to the East.

Mt. Shiude's best-kept sakura secret! Enjoy cherry blossoms set against a clear view of the islands of the Setouchi.

No Entry by Large Buses

The road up Mt. Shiude is narrow and has tight turns that cannot accomodate large buses.
Therefore, large buses are prohibited from entering the Mt. Shiude trailhead.
Tour companies or large groups should come via medium bus or smaller. 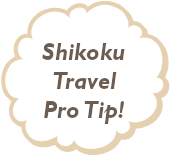 Travel by Car for the Best Experience!

Mitoyo (and much of Shikoku in general) is rural; trains and buses run infrequently. Visitors holding a driver's license valid in Japan should travel by car for the quickest and most comfortable visit.

（１）Due to its status as a national park, open flames are not permitted anywhere on Mt. Shiude. This includes- but is not limited to -barbeques and fireworks.

（２）During Sakura Season, Mt. Shiude is considered to be an event space, and thus drone photography is not permitted without special permission. Press affiliates should contact the Mitoyo Tourism and Exchange Authority (0875-56-5880 or info@mitoyo.org) for permission in advance.