An Interview with Dinh Q. Le

Vietnam-born artist Dinh Q. Le moved to the United States in the late 70s when he was just 10 years old. After studying art, his works were featured first in the New York Museum of Modern Art, then later around the world. In 2015, he held a private exhibition entitled, “Memory for Tomorrow” in Tokyo’s Mori Art Museum.

During the 2019 Setouchi Triennale Art Festival, several of his works will be on display on Awashima Island. These include “Night & Day (Life Goes On),” “A Bouquet for the Lady of the House,” and “PhoUdon & COFFEE HOUSE” (all referred to as aw08). We asked him about the inspiration behind these works.

An Island of Beauty and Melancholy 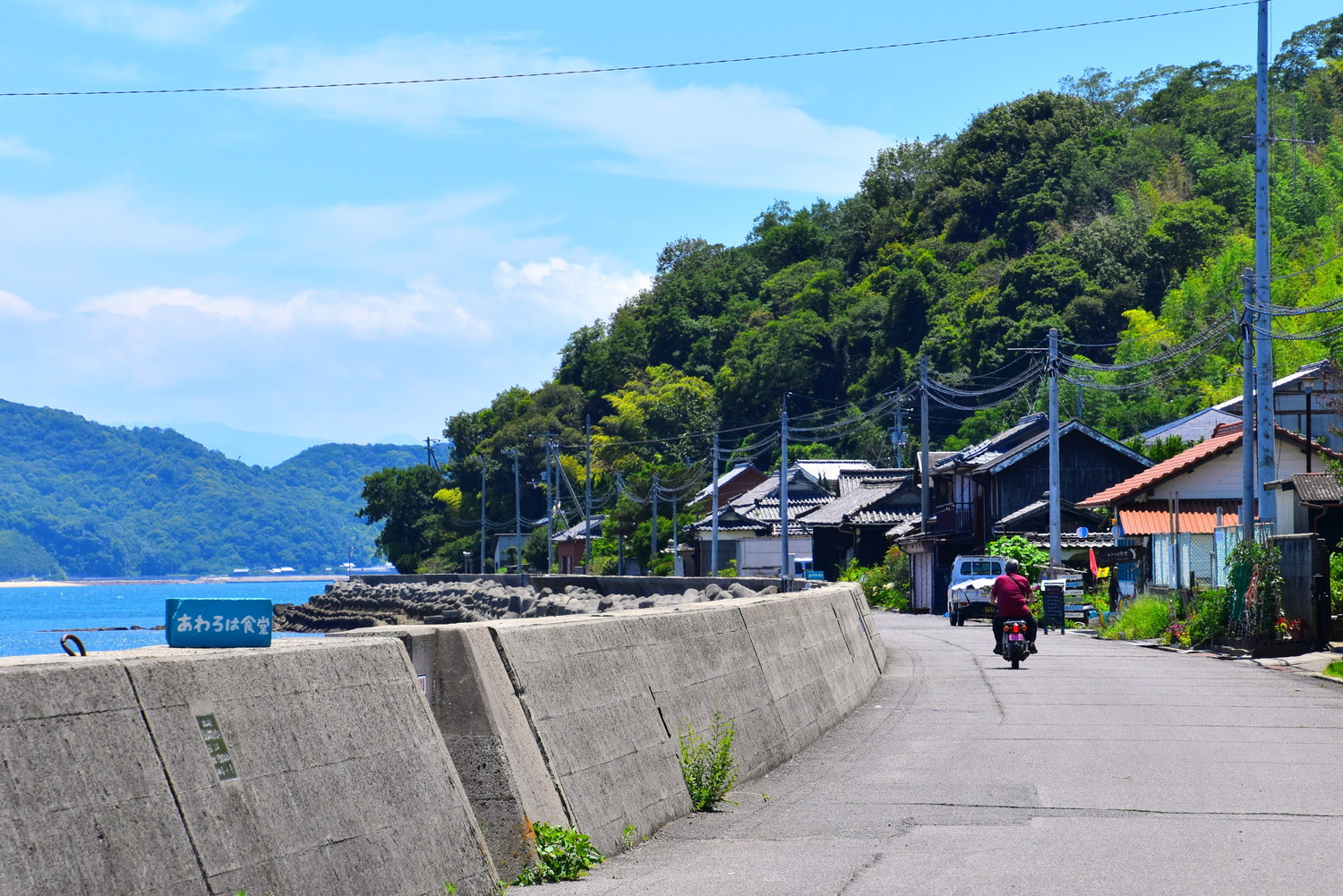 ―I heard that you came to Awashima Island 4 times in preparation for the Triennale. What was your impression?

Le: When I first saw the Setouchi, it was 15 years ago on Naoshima Island. I was really struck by the beauty of the islands.

This time, I was able to go around to many other islands, including Awashima, and my overwhelming reaction was shock that such beautiful locations had been left in such peace and quiet. If this were Vietnam, it would be overrun by beaches and resorts.

But at the same time, as I walked around Awashima, thee was this air of melancholy.

This island used to have children running around and be bustling with people. As the population has decreased, there are more and more abandoned buildings among the beautiful houses.

The Desire to Send Flowers to Those Who Have Embarked 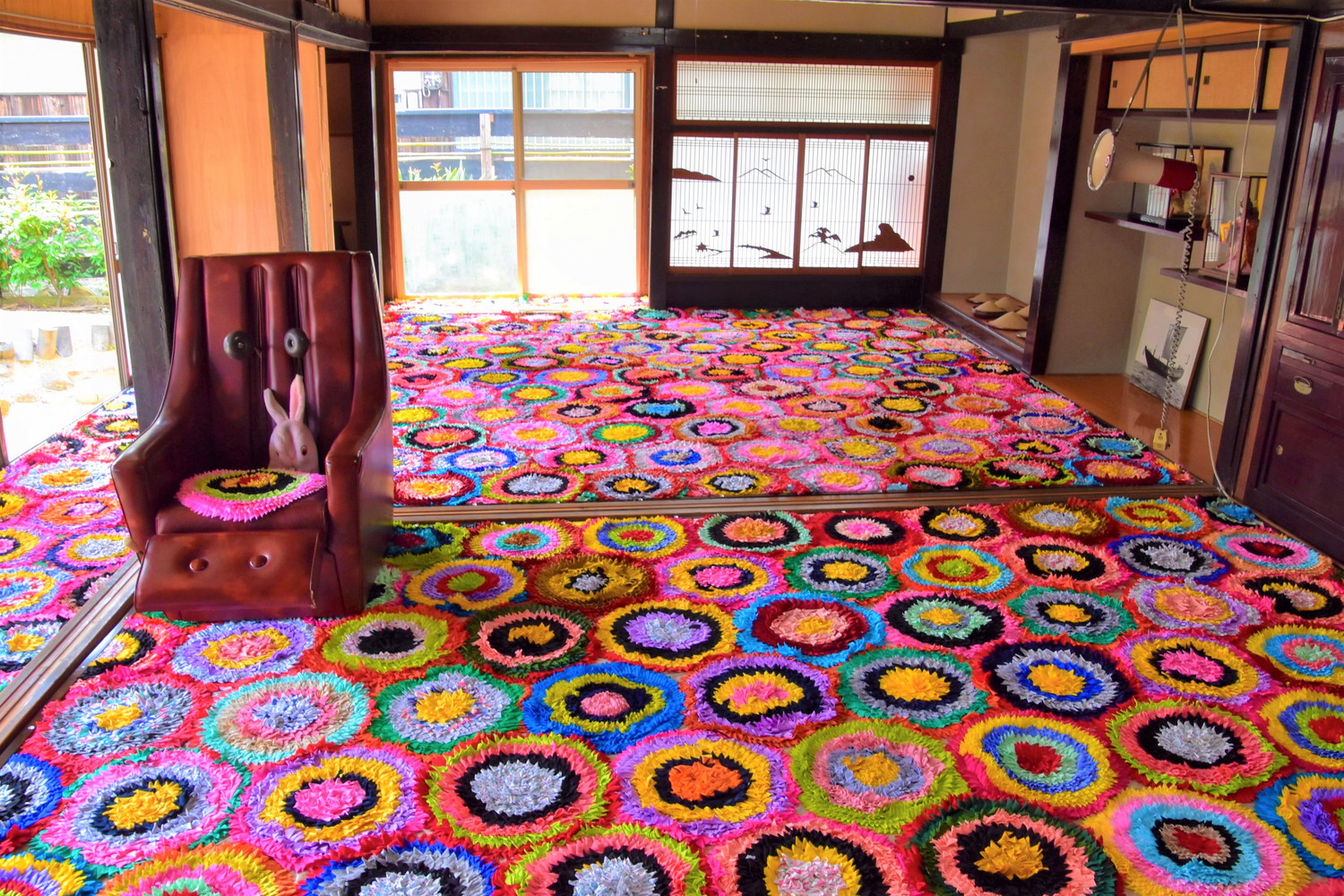 “A Bouquet for the Lady of the House”

―”A Bouquet for the Lady of the House” blankets the inside of an old house on Awashima like a rug. What made you decide to create a piece like this?

Le: Up until very recently, my mother lived in the United States. However, now that she’s 86, she’s come to live with me in Vietnam.

The house she was living in in the US was the same one I grew up in since I was 10 years old and full of memories. But when we sold that house, we had to leave a lot of things behind.

While that was happening, I learned about this house, and how the owner- an older woman- had had to move to a retirement home.

I began to see this woman the same way I see my mother.

It’s really difficult to leave your family home. I could feel her distress.

I wanted to return the joy to the house, to say, “Don’t be sad.” That’s when I had the idea to bring a brightly-colored rug into the house. 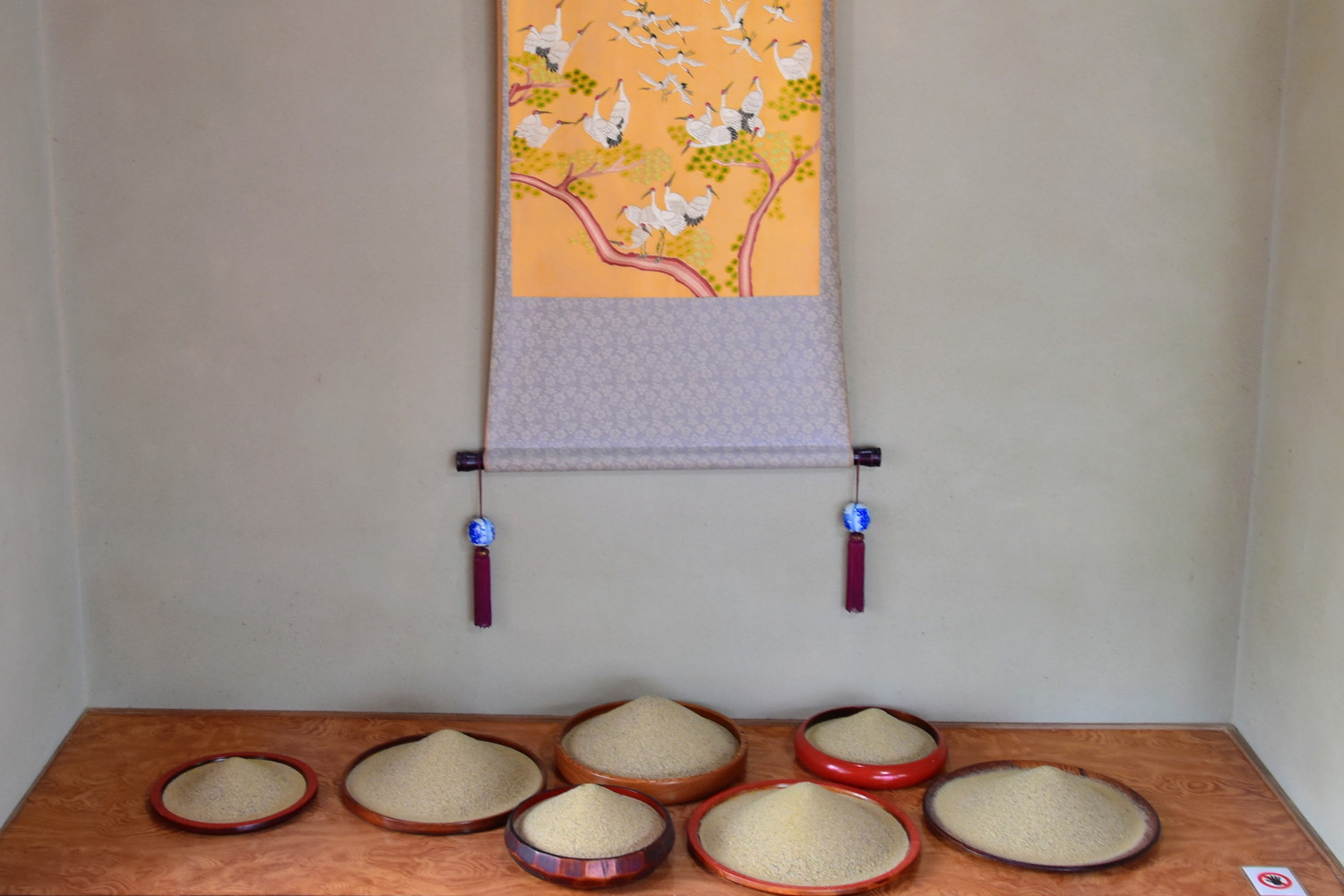 “A Bouquet for the Lady of the House” also incorporates hourglass-like trays of sand.

At the same time, it’s not just a rug, it’s a bouquet of flowers.

As you get older, it becomes more difficult to adjust to new environments, but many people still make the decision to move to retirement homes and I think that’s really brave.

I want to send a bouquet to everyone who takes this courageous step. That’s why the piece is titled “A Bouquet for the Lady of the House.”

I want everyone who comes to see this piece to also stop and take time to look at the furnishings as well. I’ve arranged the items left behind to tell the story of the house and its inhabitants. 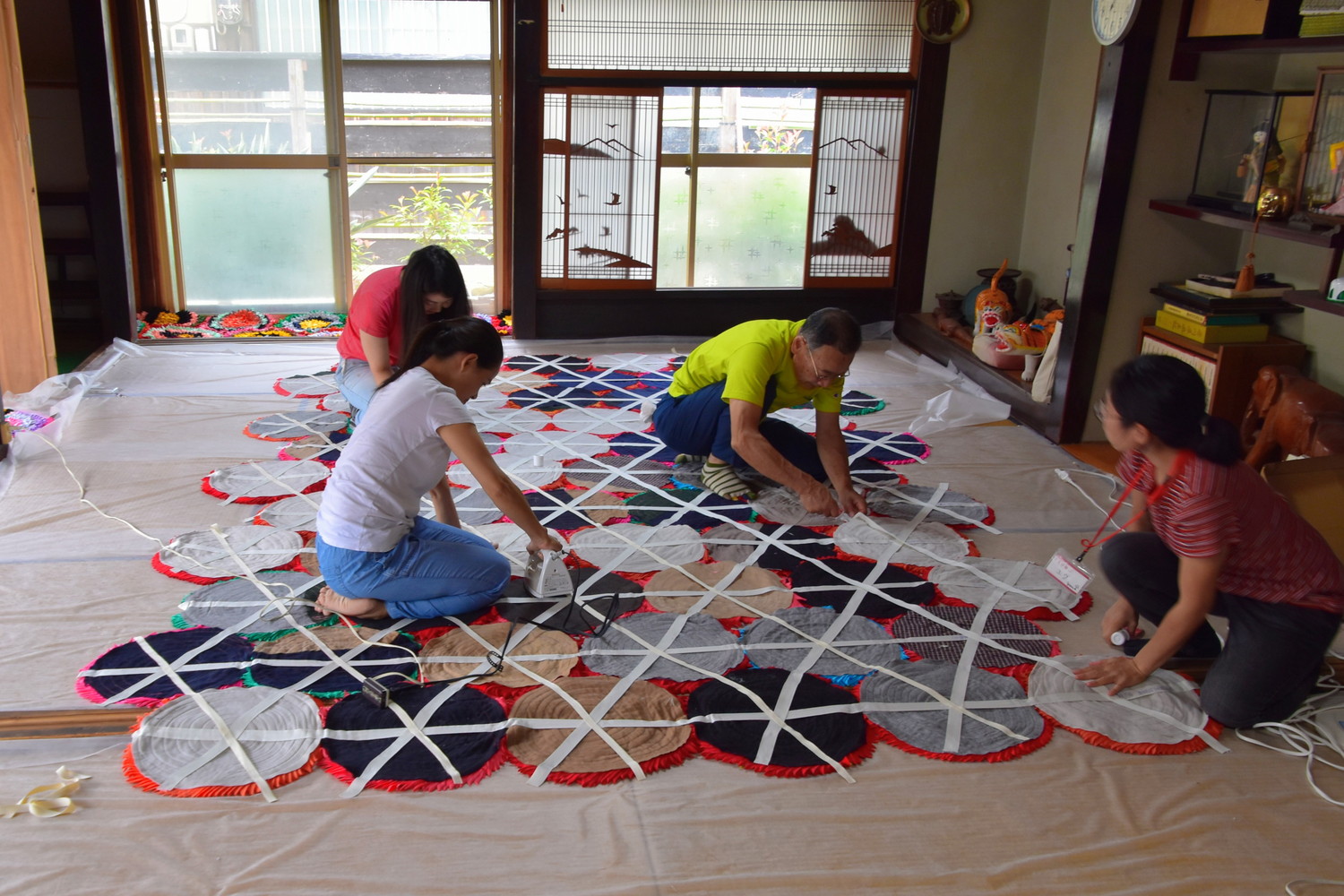 ―I heard that the cloth used in the rug was from a clothing factory in Vietnam.

Le: Modern Vietnam is the hub of the world’s clothing manufacturing. Actually, I believe the majority of the clothing I’ve purchased in both Japan and America was made in Vietnam.

I learned that there’s a tremendous amount of waste produced during the manufacturing process. About 15% of the cloth used to make a T-shirt ends up as waste.

Thankfully, a lot of this waste isn’t actually thrown away. Many women use spare cloth to make rugs for their homes.

My mother also made rugs like this. These two factors combined to make up my mind about the form this piece would take.

The rug in this piece is made up of sections made by Vietnamese women, then assembled on Awashima by local volunteers.

―This time, many of the artworks on Awashima Island, such as TARA (aw03), are centered around the theme of environmental issues. It seems like this piece resonates with that as well. 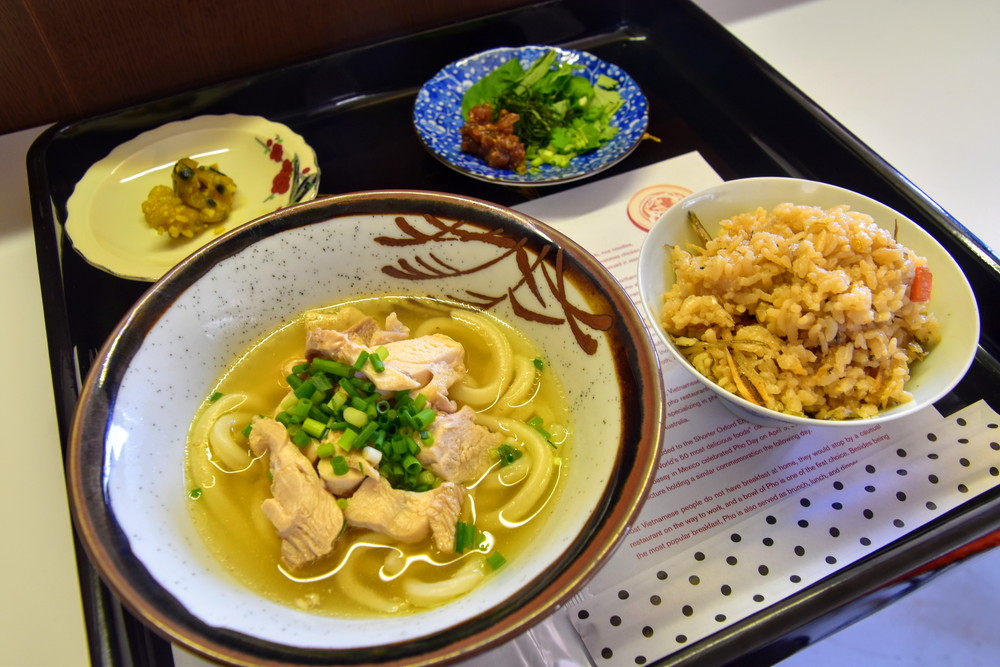 ―I want to ask you about “PhoUdon＆COFFEE HOUSE.” Why did you want to create this kind of collaborative meal between Kagawan and Vietnamese cuisines?

Le: It’s been my experience that when someone lives abroad for a long time, they start to crave foods from their home.

For me, it’s pho. Whenever I smell it I get the urge to eat it myself.

At one time, I was staying in Tokyo for a few months when I happened to eat udon. The flavor isn’t really that similar to pho, but I had the thought, “This is what I’ve been looking for.”

So it was a pleasant surprise to learn that Kagawa is famous for udon after I had agreed to participate in the Triennale.

The pho noodles you can get in Japan are all dried, they don’t have the same flavor as fresh-made noodles. It was only logical to use locally-available udon noodles. 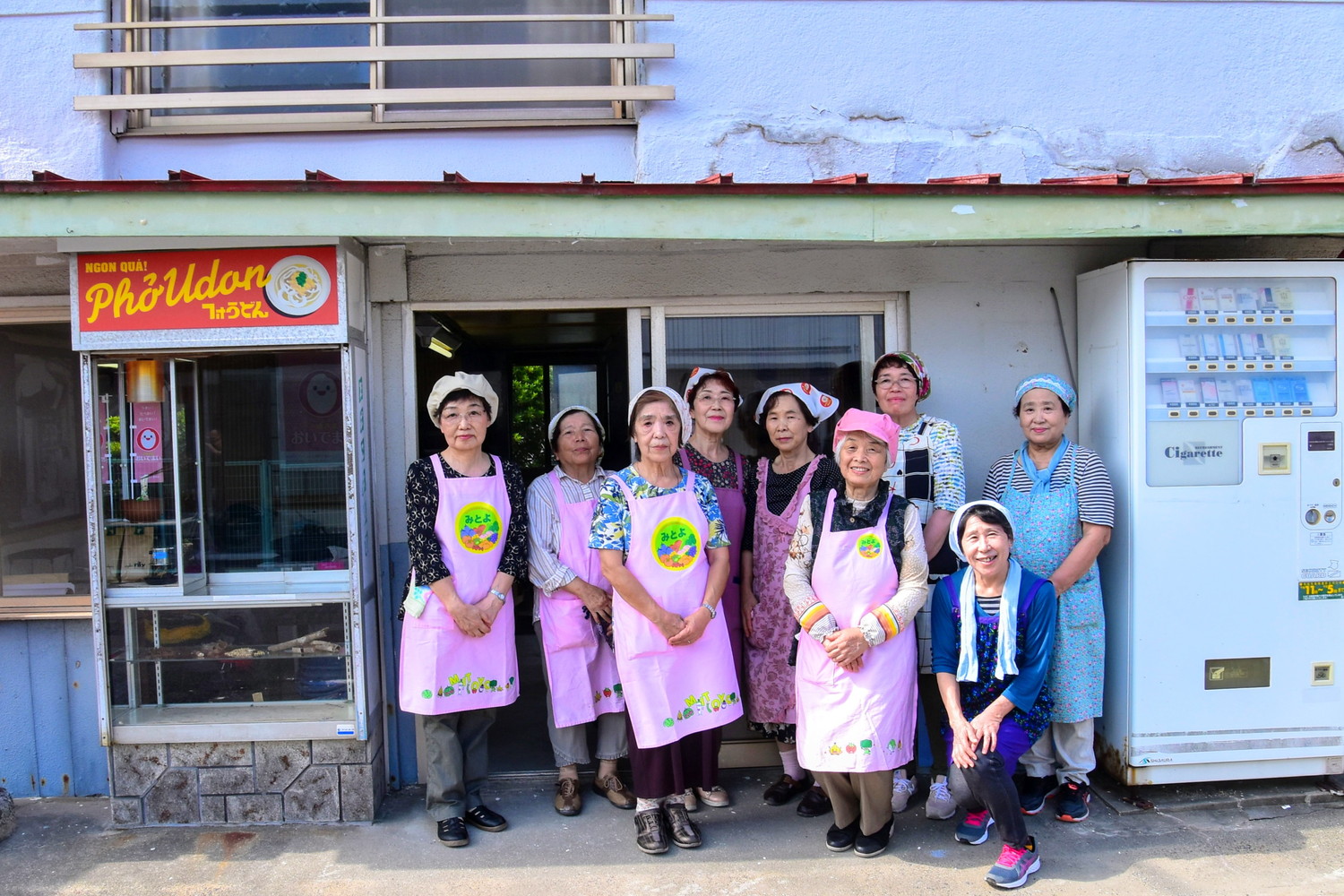 ―”PhoUdon＆COFFEE HOUSE” was made with cooperation from Mitoyo’s Seikatsu Kenkyu Group, wasn’t it.

Le: All the women involved are really inquisitive and pitched in really passionately.

I noticed during our time together that volunteer culture has really taken root in this area. Unfortunately, in Vietnam people are busy at home and work and don’t have the time to volunteer much.

Art festivals like the Setouchi Triennale are a great opportunity for people in the area to create a closer community; it’s great because everyone can tap into their own creativity at the same time.

The Setouchi Triennale Art Festival is well-known around the world, but I think what attracts people is more complicated than just the art. I think they are looking for a new artistic model that brings the art together with the community.

―What are some of the differences between a exhibition at an art museum and displaying your work on Awashima Island?

Le: For the most part, when you exhibit in a museum, you’re bringing along pieces that you made elsewhere. But here, the pieces were created while learning about the area and getting to know the locals. Through this, the art is more localized and it’s like each artwork was born here.

I’ve been an artist for 20 years now, but I still question what it really means to be an artist. The Setouchi Triennale has been a chance to further my understanding of what it means. 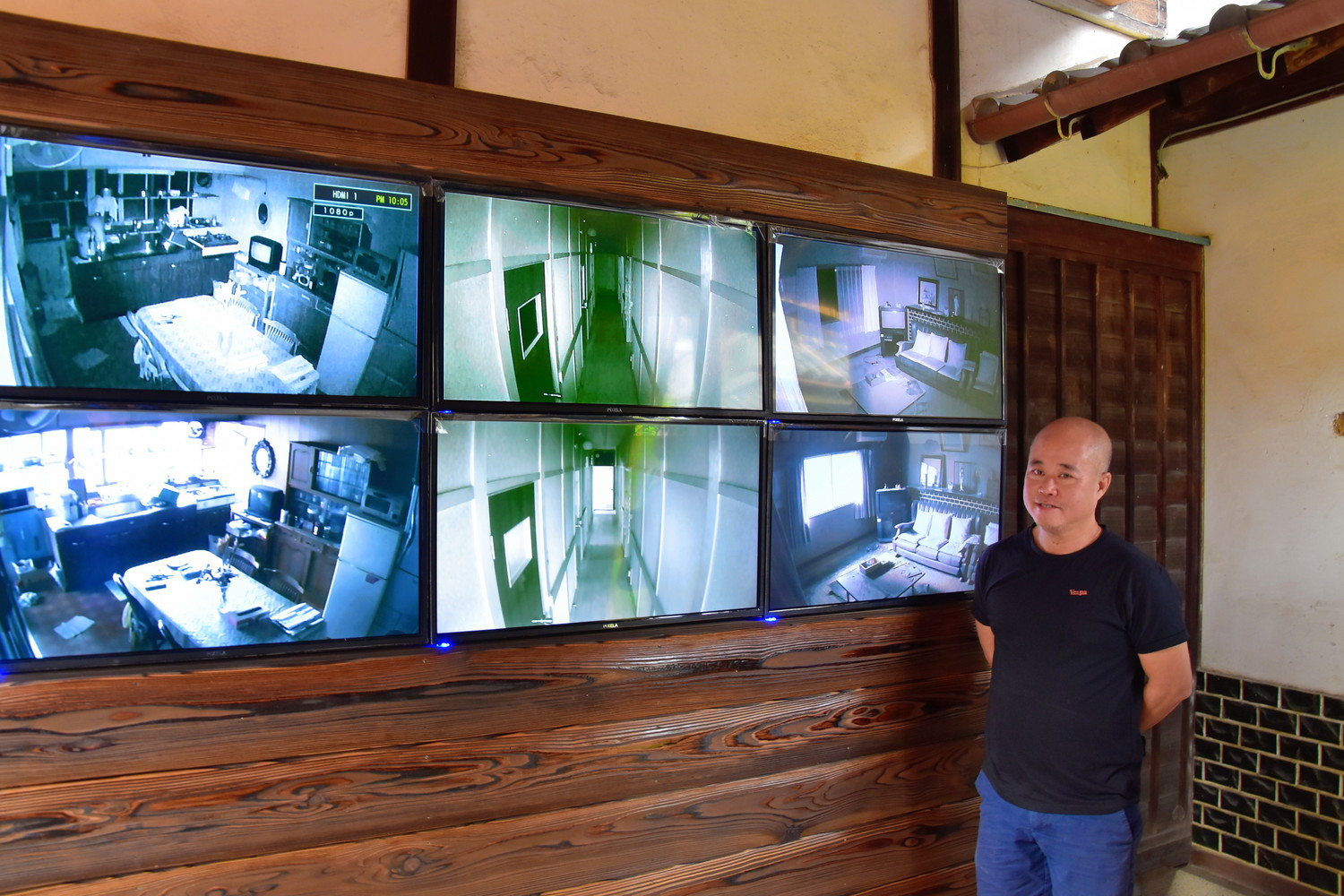 Le: Sometimes we say that a house with no one living in it is a house that has died. But when the humans leave, cats and mice and the like move in, giving the building a new life.

As I walked around Awashima and saw all the empty houses, I wondered, “What happens to these empty houses when the people leave?” But of course any animals living there will run away if someone goes inside.

That’s why I installed security cameras in the house, so that we can see what happens in the house when there are no humans around.

There are 8 cameras in total, 4 that show a live feed, and 4 that show a recording of 12 hours previously. Even I don’t know what we’ll see on the camera feed. We might see nothing at all, or, who knows, we might even see a ghost haha. 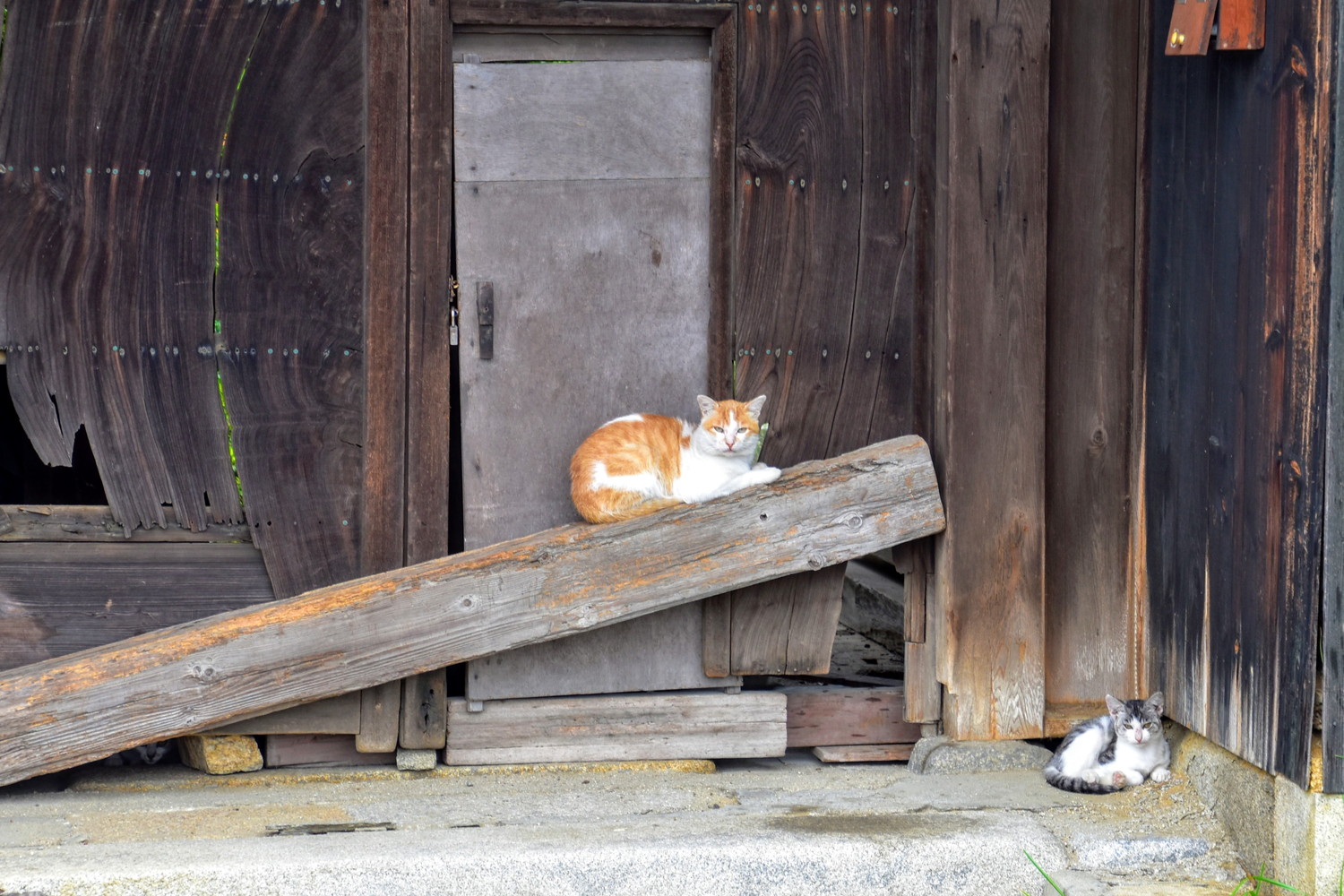 Some of the cats who have made a home in an abandoned house.

―Vietnam still has a large population of young people, while Japan’s birth rate is falling and the number of empty houses is increasing. I imagine the atmosphere must be very different.

Vietnam may not have Japan’s population problems, but there are still a large number of young people moving out of the countryside and into large cities for work, while the elderly are left behind. It’s not happening as quickly as in Japan, but the general trend is the same.

Awashima does resemble Vietnam in some ways. I hope that, going forward, people from each place will be able to learn about the other.

The connections between Vietnam and Japan seem as though they will only grow deeper in the future. At the time of this interview, Mr. Le concluded, “Now, Vietnam is becoming heavily invested in Japan; many Vietnamese people come to Japan to study or work. At the same time, the number of Japanese people opening restaurants in Saigon and Hanoi is growing.”

Closer than it seems, Vietnam’s influence on Le’s work and growing relevance in the area cannot be overstated. Perhaps Le’s works offer a window into the future of both countries.