An Interview with Maki Ohkojima

A Message from Awashima to the World

What does it mean to live?

Going to work; eating dinner- these things may come to mind when you consider such a question.

But, if you delve into the question beyond the basic level, humanity is so much more than these everyday rituals in the circle of life.

Maki Ohkojima is an artist on Awashima Island who is working to get to the foundation of life through her artworks. She is currently a resident of Awashima Island’s Awashima Artists’ Village for the second year in a row, and her pieces will be featured in this year’s Setouchi Triennale Art Festival. 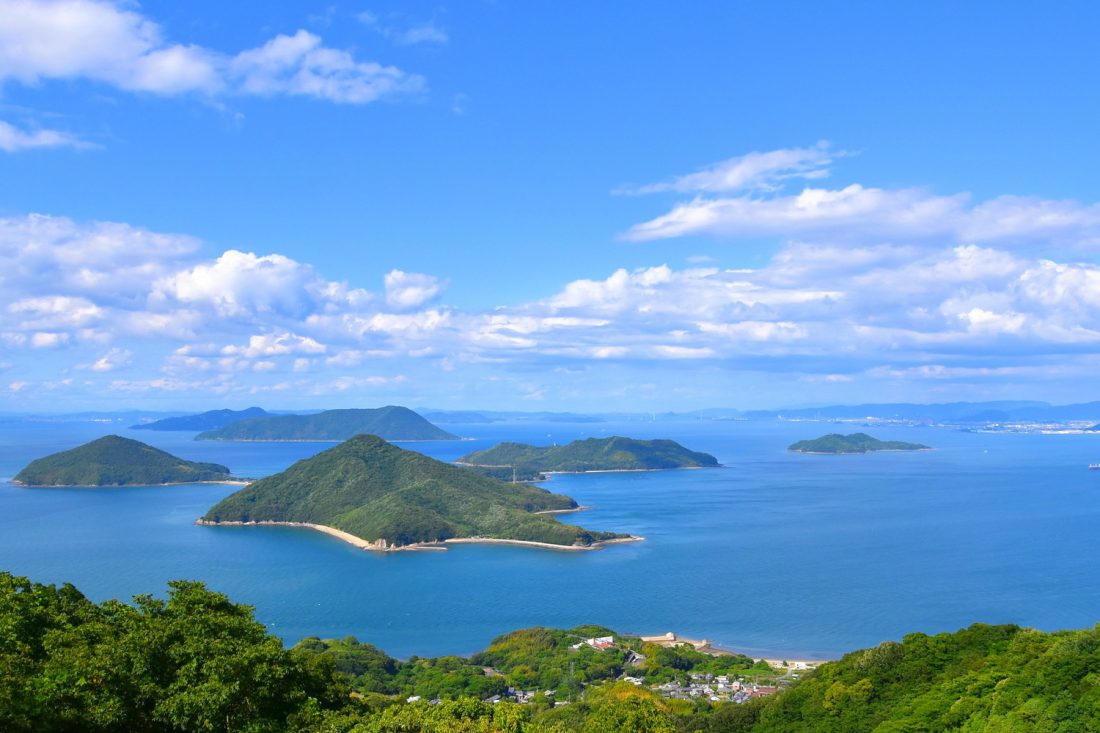 Awashima Island, as seen from the top of Mt. Shiude

Awashima Island is a small island in the center of the Seto Inland Sea, just off the shore of Kagawa Prefecture’s western region.

As the site of Japan’s first maritime school, it was the jumping-off point for generations of sailors sent around the world.

Now, with a constantly declining population, the island is the site of great natural beauty, where visitors can see finless porpoises and sea fireflies. 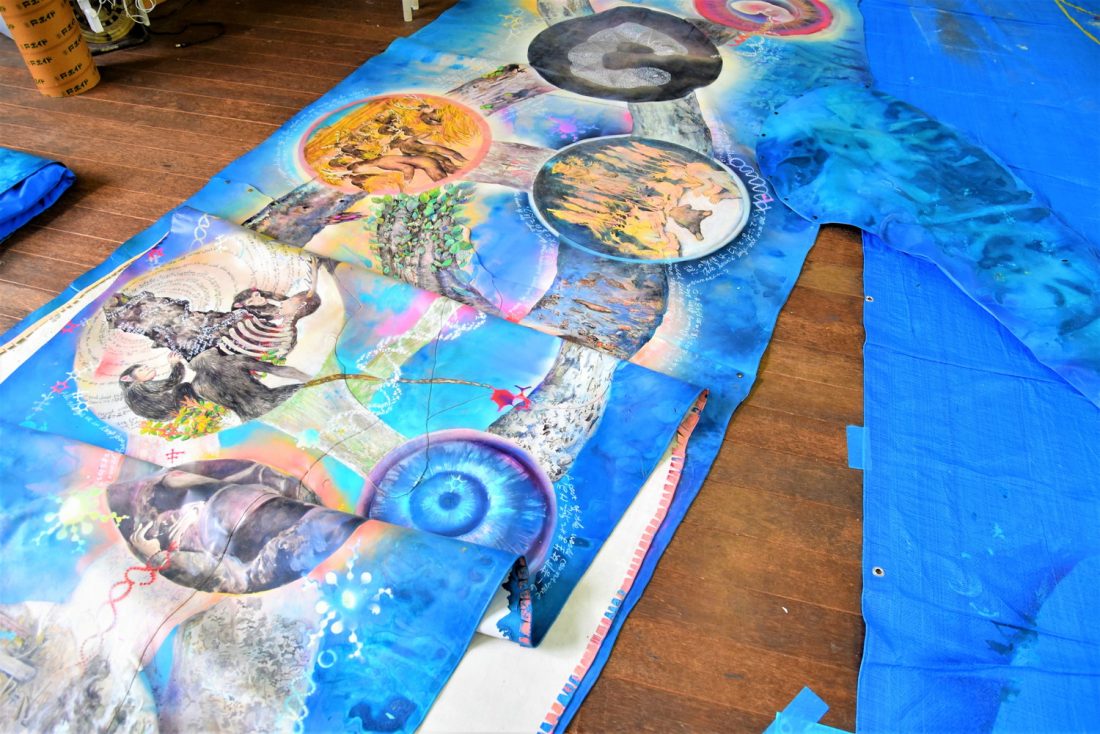 It is on this island that Maki Ohkojima is creating her artwork, The Soup of Life. The piece uses fabric scraps to create a whale that is 7-15 meters long and covered in paintings showing the history of humankind.

To find out why she decided to make a piece like this, we went to speak with her.

*This interview is from June 2019. For more recent information, check out Awashima’s Triennale Facebook page (Japanese Only) or check out our other pages.

A Whale that Carries the Message of the World 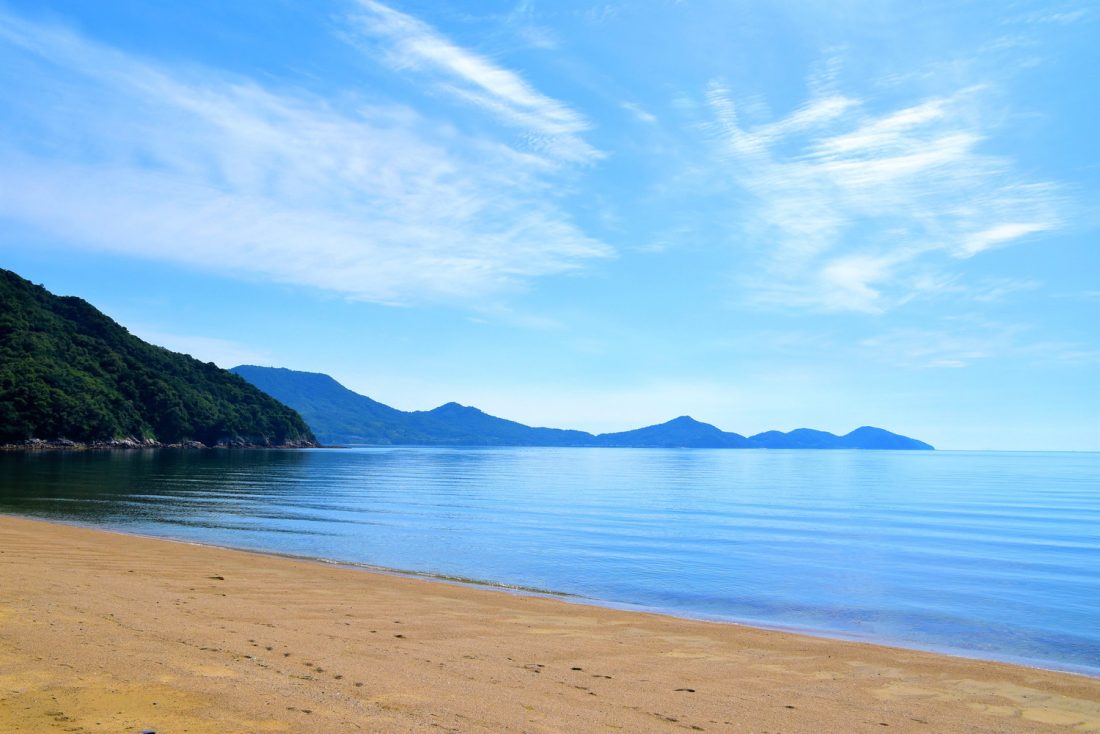 Nishihama Beach, where a minke whale was buried.

―Why did you decide to use a whale as the center of your artwork?

Maki: “In 2002, a minke whale carcass washed up on Awashima Island. It was buried at the time, but the bones are now display in a museum. That story was the impetus for this artwork.

“In 2017, I was on board the Tarago, a former French research ship, for 2 months working as an artist when a whale carcass floated up to the boat. It had started to rot, and you could see the white fat peeking out in places where the carcass had been eaten by sharks and birds.

“Before that, I had been somewhat aware of the food chain, but seeing it made me realize that the ocean is truly like a melting pot or soup where life mixes together. 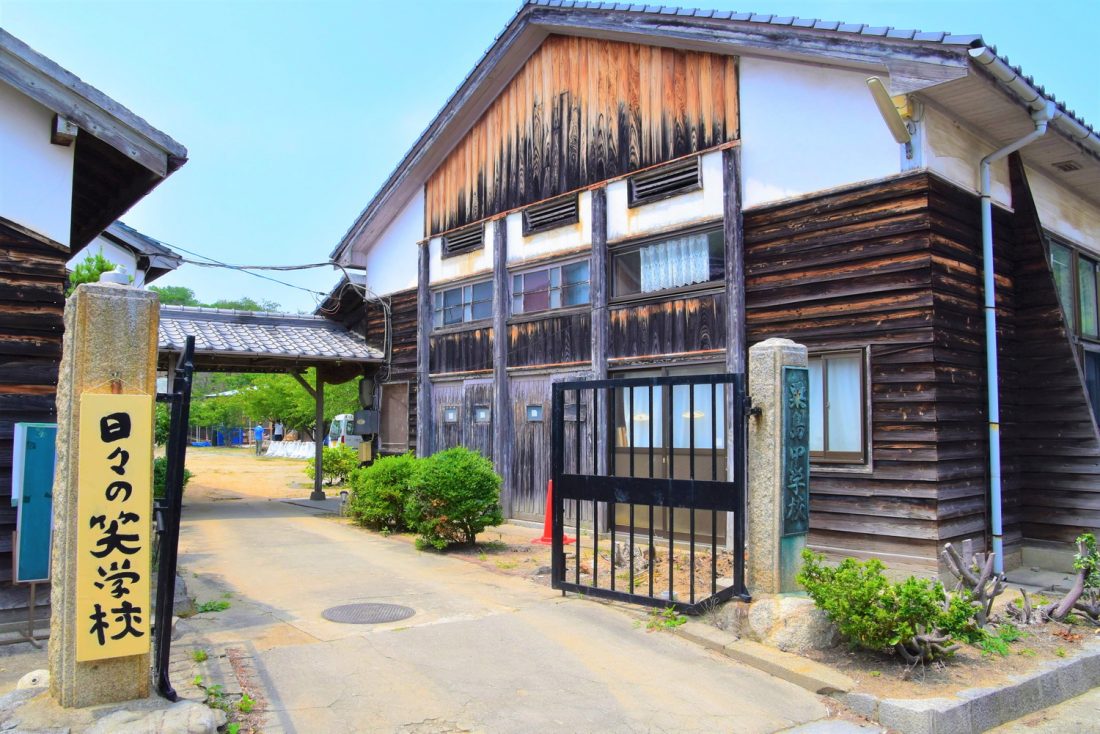 “After I had this epiphany, I talked to Katsuhiko Hibino, who was also working on the Tarago, and who leads the Awashima Artists’ Village. I was able to join the program the following year in 2018.

“I’m originally from Tokyo, so life on Awashima Island is really different from what I was used to. For example, one morning when I went to leave my house, I found that someone had left me a fresh-caught fish. I was surprised by their kindness.

“It was while I was on Awashima that I heard about the whale in 2002, and it put this image in my head of a whale that carried the story of the world.” 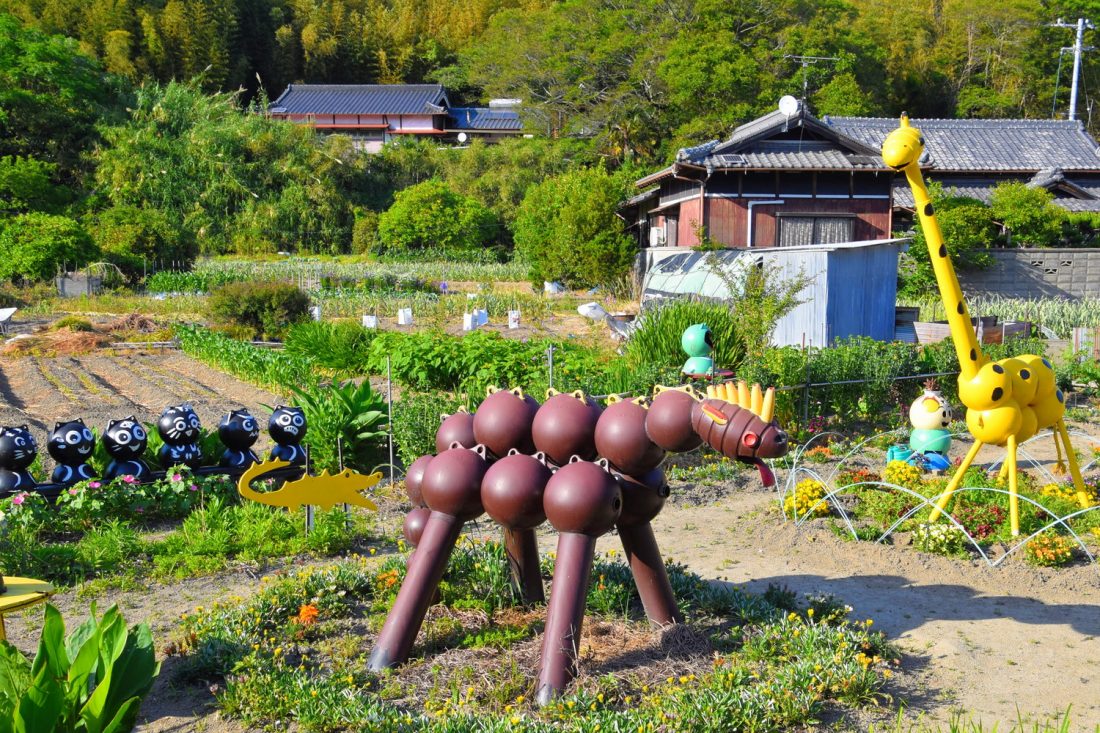 ―What did you think of Awashima Island when you first arrived in 2018?

Maki: “It felt like “the island.” Japan is obviously made up of islands, but a place like this where the sea and mountains are together feels like the quintessential island experience to me.

“People tell me that there used to be more than 2000 people living here, with lots of carefully tended fields. Now, there are fewer than 200, and all the fields have been taken over by nature.

“Hearing this, you might get the image of farms in ruins, but it’s more like nature taking back what we borrowed from it. If you think about it, a lot of deserts used to be completely different, they just lost their trees. Nature will take it back again, it just takes time.

In Japan’s case, there are a lot of natural disasters. People look to religion to protect even the smallest things they’ve created. In some ways, living in such a place gives you a sense of connection to early humans. 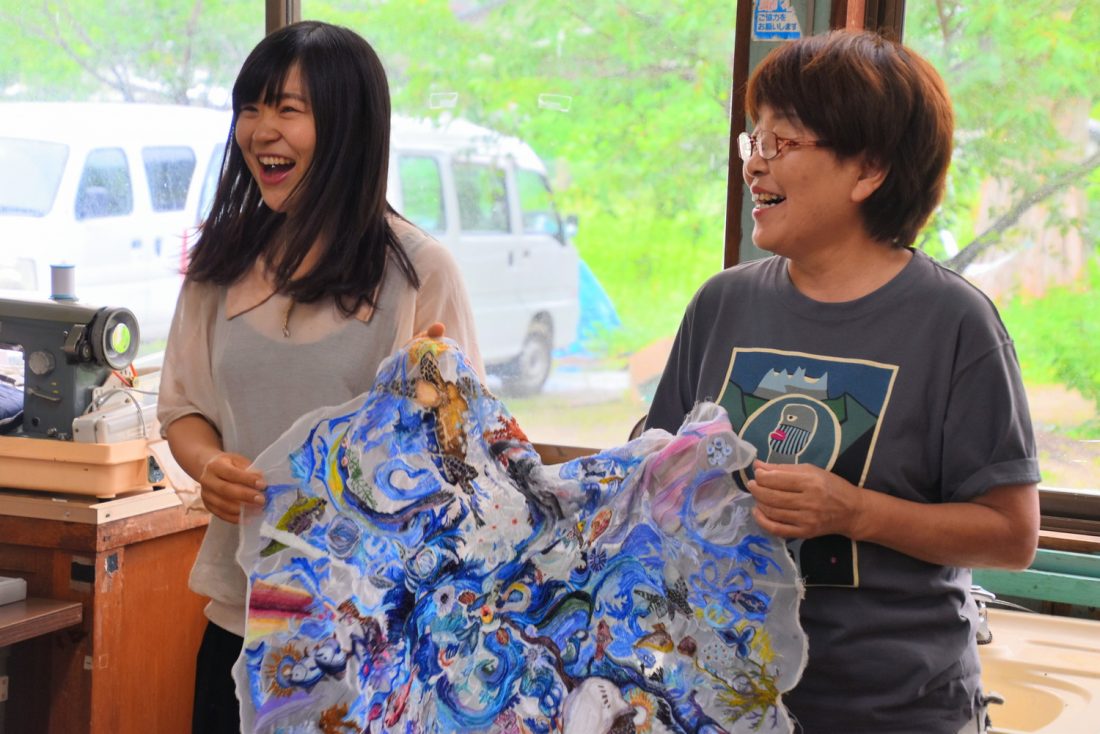 Maki Ohkojima together with Estuko Matsuda, a resident of the island and fellow artist.

―How do you feel about the process of creating artworks on Awashima Island?

Maki: “Firstly, in Tokyo I would never be able to use such a large studio. I feel grateful to have the opportunity to make such a large piece because I’m on Awashima Island.”

―The pieces you’re making here are in cooperation with island residents, right?

Maki: “I’m so thankful to everyone here, they have been so helpful!

I’ve been able to get to know them each on a personal level as we’ve worked together. It made me start to wonder if we couldn’t make something that would show everyone’s individual personalities, so I asked the to create some embroidery. I’m not very good with my hands, but the women here are incredibly skilled at it.

When I first explained what I wanted, they all insisted there was no way they could embroider on that level, but looking at the parts they’ve completed, it’s perfect haha. 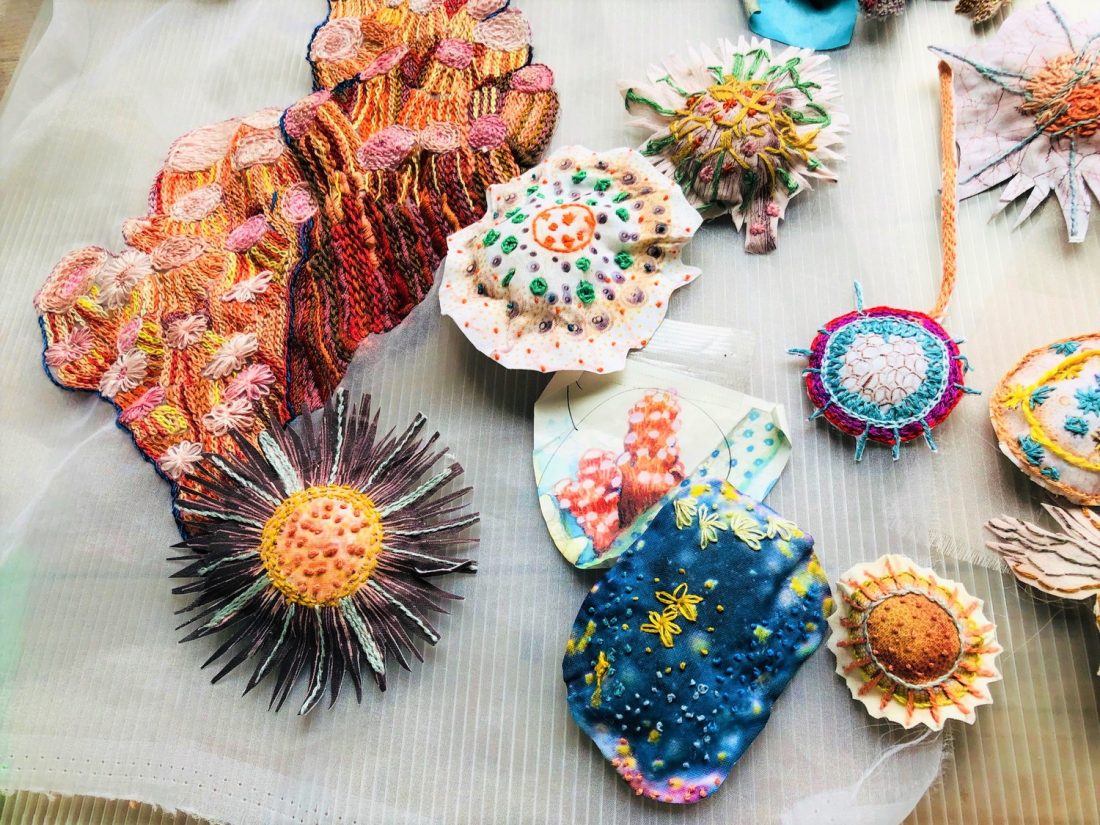 Sea animals embroidered by some of Awashima Island’s residents.

“Creating an artwork is a reciprocal process between people and their environment. I know that my current piece could not have been made anywhere else.”

―You said that your work uses a lot of reclaimed plastic and ends of fabric that couldn’t be used in the factory.

Maki: “We’ve added plastic that washed up on Awashima Island in making the whale.

“The garbage floating in the ocean is the world’s garbage. Things that were thrown away all over the world float sometimes float thousands of miles before washing up on shore.

“Organic materials will get eaten by various bacteria and such before they can travel so far, but man-made things like plastics don’t have a limit. 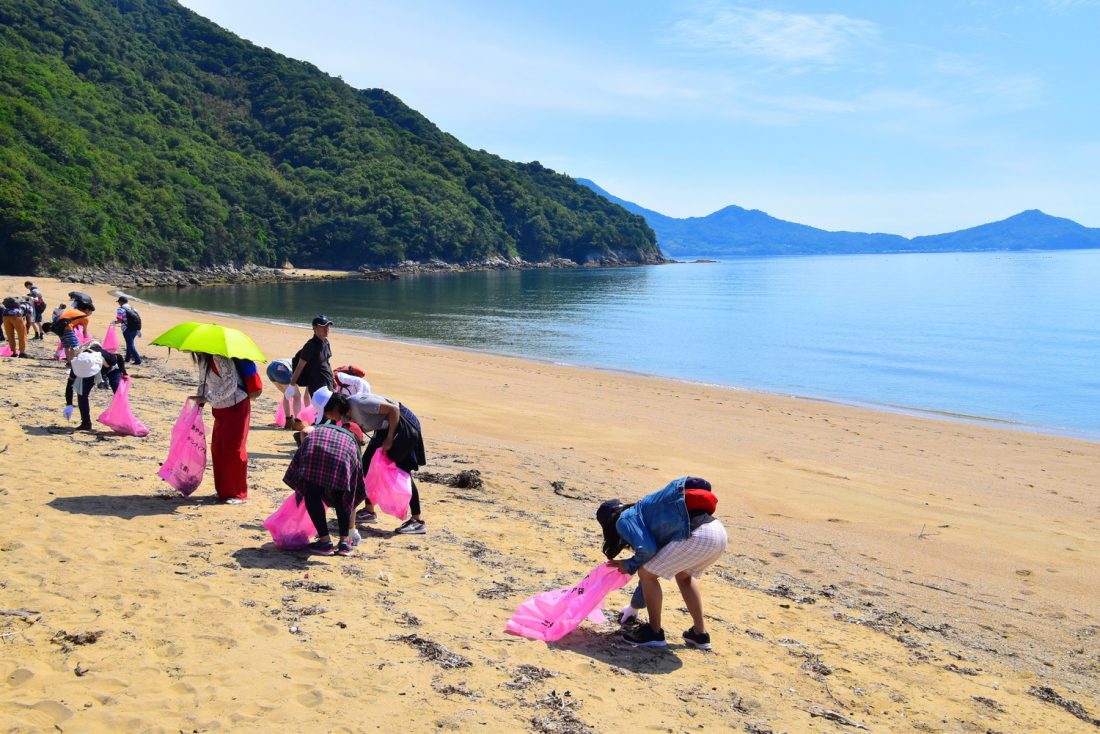 An international event in June 2019 included a beach cleaning

“In order to protect the environment, the people here clean the beach every year. It’s not exactly a fun job.

“I’ve painted the progression of human culture on the whale in my artwork. Humans are also originally a part of nature; what have we done up until this point? What will we decide to do in the future? I hope that people who see my work will ask these questions.”

The Role of Art in Society: Creating Mental Connections 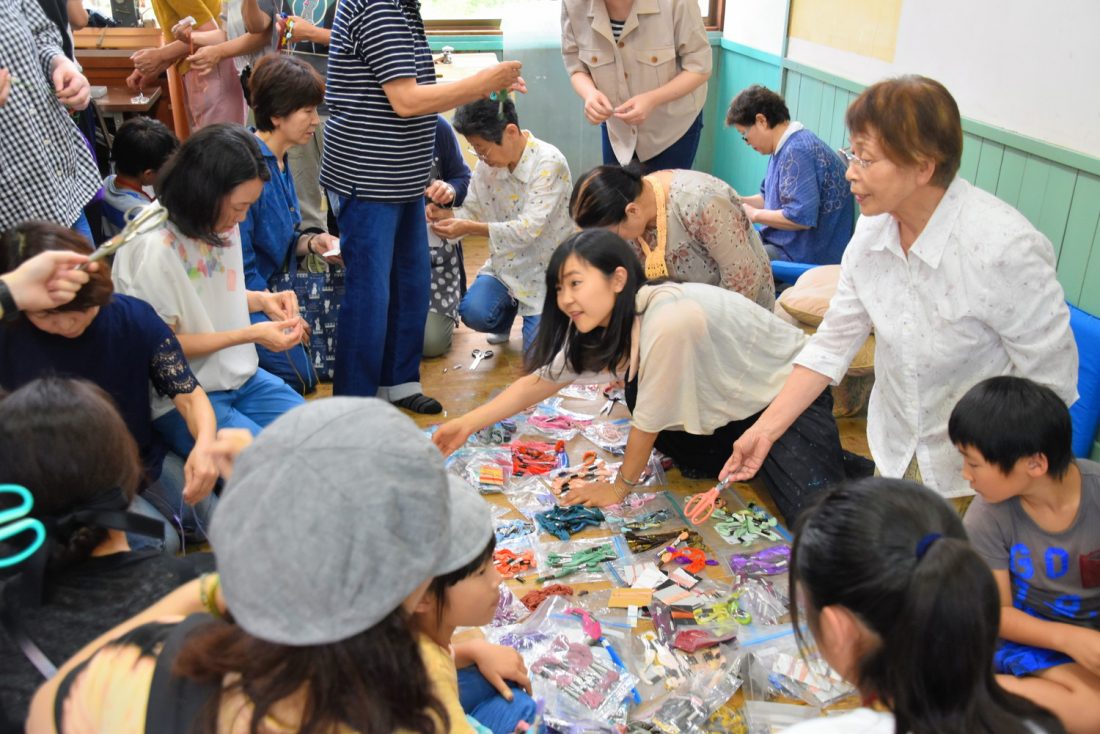 Maki Ohkojima during a workshop

―What do you think is the role of art in society?

Maki: “The imagination cultivated when you interact with art lets people poke small holes into their existing understanding of their culture. It lets them broaden their point of view and converse with others, if only a little bit. I think that those sills are going to be necessary in the world going forward.

“In the capitalistic society we have now, people want to create products that a lot of people like so that they can sell of a lot of them. But living this way has led to declining birth rates and climate change.

“Conversely, art values what is different from the norm. It’s the exact opposite of society at large. That’s why I wonder if maybe art can create closer bonds of community, create innovation in business, and maybe even save our society. I’m thankful to the residents of Mitoyo and Awashima Island for reminding me of this.”

Maki Ohkojima’s artworks will be view-able during the Fall Expansions period of toe 2019 Setouchi Triennale on Awashima Island.

For more information about Ms. Ohkojima and her work, visit her website.