An Interview with Mayur Vayeda

India: the world’s second most populous country.
From a Japanese perspective, India brings to mind images of the Ganges River, yoga, and people working in IT. However, the reality of the country is an incredibly diverse and encompasses a wide variety of peoples, lifestyles, and jobs.

Mayur Vayeda is a member of the Warli (also sometimes spelled Varli) tribe, whose people live in the western, mountainous region of India, about 3 hours from Mumbai. The Warlis hold animistic beliefs, not dissimilar to Shintoism in Japan, and many of them live off a mixture of agriculture and hunting, keeping them close to nature in their everyday lives.

Warli painting is the culture’s traditional art form, and some scholars believe that this tradition stretches back to 2000 BCE or earlier. Mayur has brought this ancient and beautiful art form to Kagawa through his participation in the Awashima Artists’ Village for several months at a time in both 2018 and 2019.

An Island with a Long History 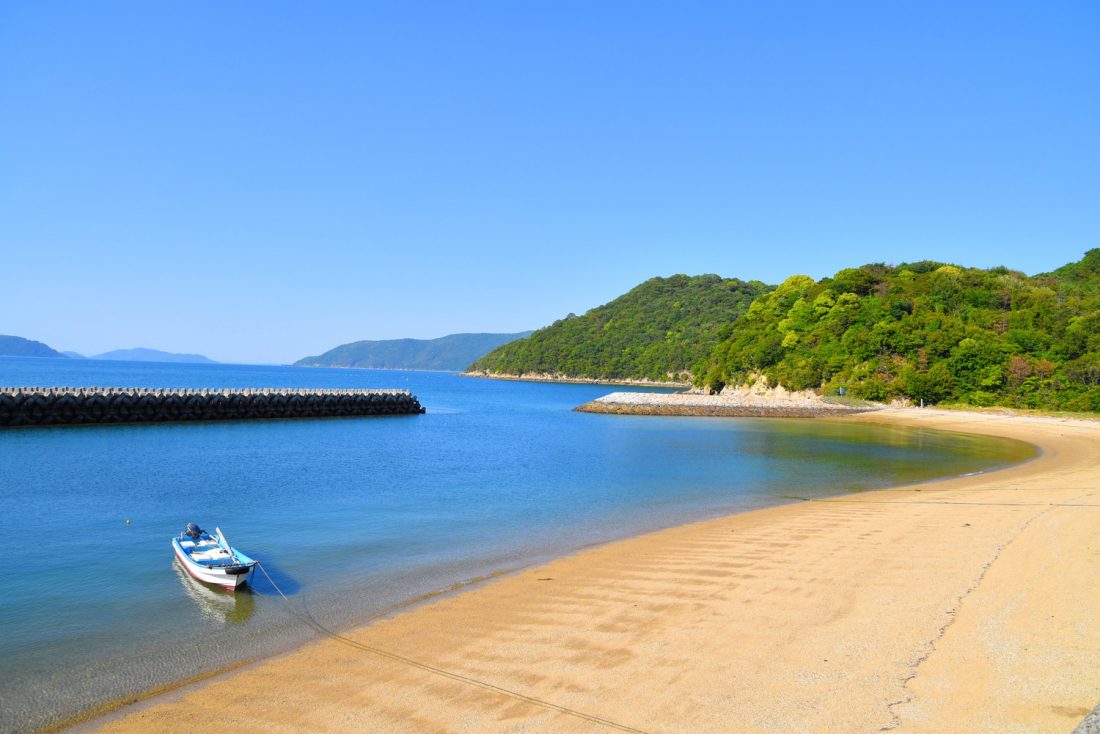 A beach in the Naka Shinden Area of Awashima Island

Awashima Island is just 16 square kilometers, but holds a rich history. In the late 19th century, the island became an important fixture in sea trade, and was the location of Japan’s first maritime school, founded in 1897.

The nearby Shonai Peninsula holds history as well in the form of many artifacts from the Yayoi period (300 BCE – 300 CE), and it’s reasonable to expect that Awashima Island was home to such ancient people as well. 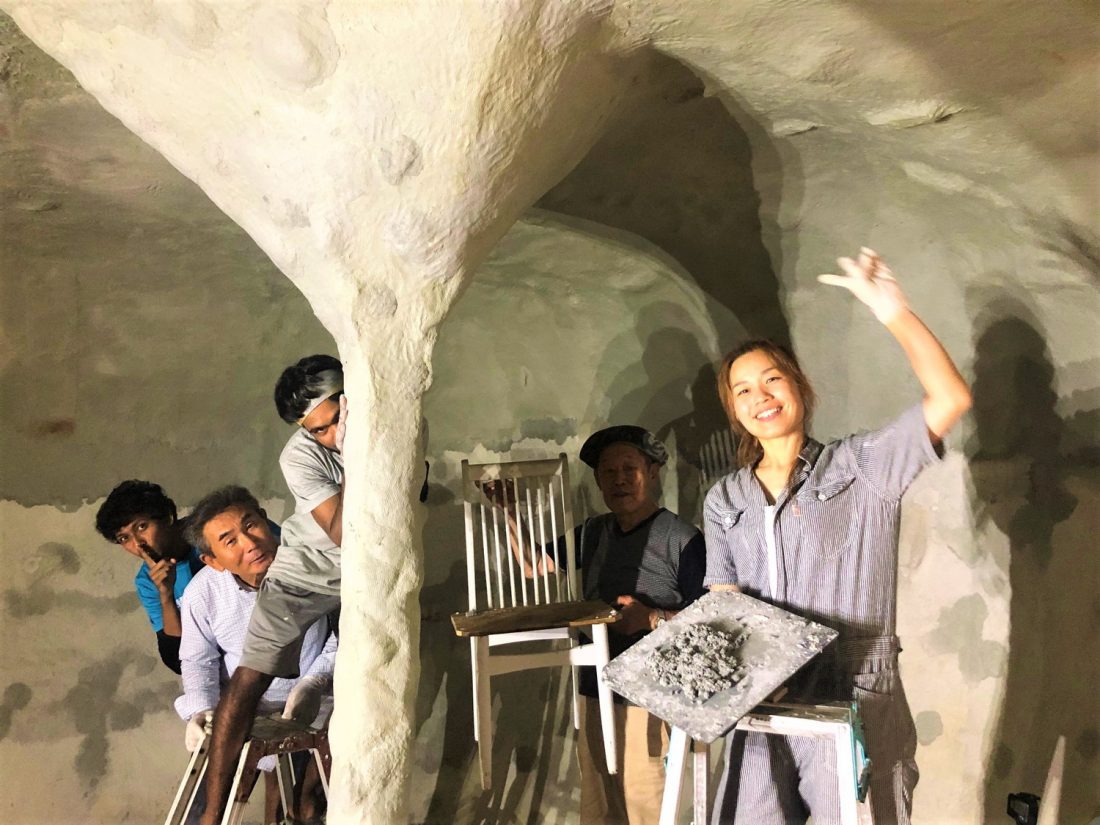 The grotto under construction

Upon learning about the area’s history, Mayur was reminded of the Lascaux cave paintings, and decided to bring the history to life with his piece, the Grotto of Beginning. In order to find out more about why he chose to make this particular piece, we sat down with him for an interview.

*The following interview is from June 2019. For more recent information, check the Awashima art Facebook page (Japanese only) or our page about Awashima Island’s Triennale artworks.

―What can you tell me about the Warli people?

Mayur: “The Warlis are a small people living in the Northwest of India. We live in the jungle and practice hunting and gathering on top of agriculture. We only began to live a modern lifestyle since the 20st century.

“When I was a child, we didn’t have any electricity at home. I would wake up very early when it was still pitch-black outside to walk 3 kilometers to school. It was dangerous, but also a bit exciting since I was walking through the jungle and there were snakes and foxes around.

“When you hear words like ‘dangerous’ or ‘scary,’ it often gives a negative impression. but it taught me about the connections between humans and other living creatures.

“Most Warlis have cattle, and the culture of having separate buildings to house the people and animals doesn’t exist. We all sleep in the same house. In the winter, it’s much warmer with them, and they warn us if a dangerous animal, like a snake, is nearby. They’re kind of like family- we all protect each other.”

―What was your impression of Awashima Island, especially coming from the Warli lifestyle?

Mayur: “I had never lived on an island before, so I was excited by that. Then, after I arrived, I realized how much diversity there is here, even on such a small island.

“Japan is an island country, but this ‘island within an island’ is really different from somewhere like Tokyo. I was surprised by the cultural differences.

“The wild boars made quite an impression. They’re not native to the island- they swam across from Shikoku, so people hunt them to keep them from spreading. It’s interesting to see how nature affects human culture this way.

“There are wild boar in my village as well. Normally they only come out in the evening. In my painting, I drew a jungle inside a wild boar, but this is not the kind of jungle you can see on Awashima Island.”

Cave Paintings that Bridge the Gaps Between Peoples 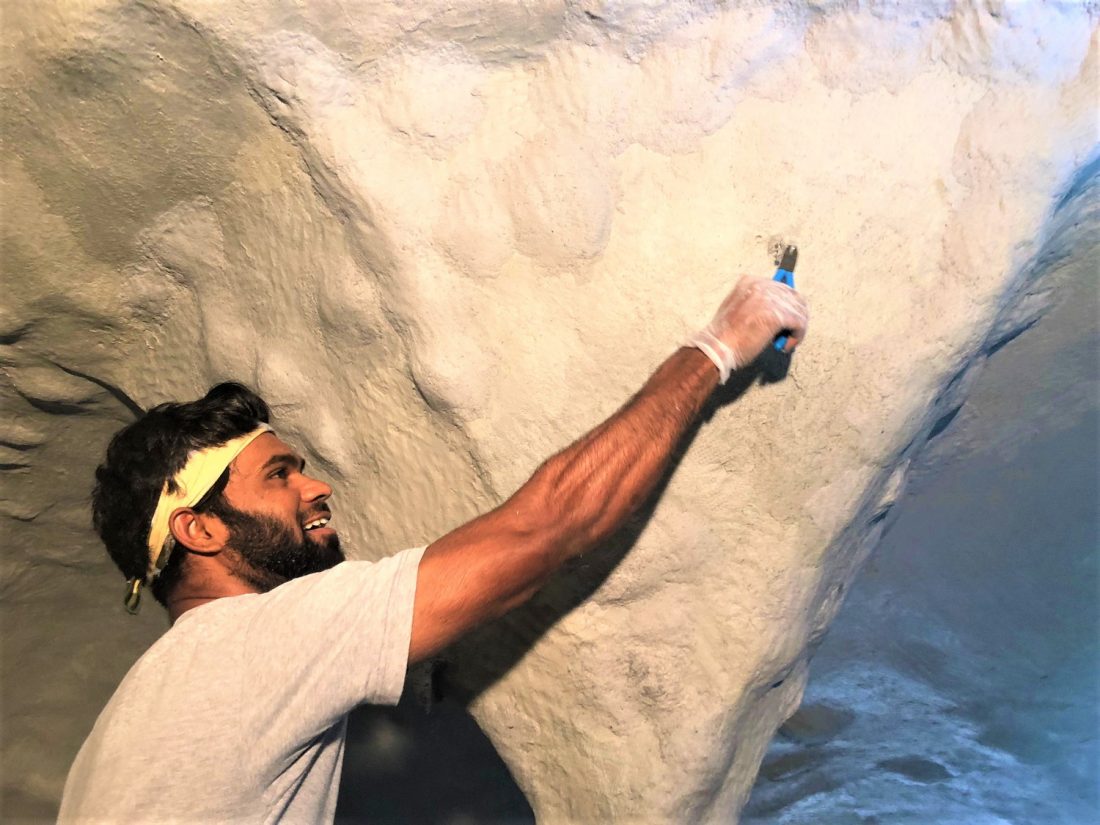 ―You’ve created a cavern-like room and are adding paintings to it. What made you decide to create a piece like this?

Mayur: “Humans used to live in caves, and the first human artworks were cave paintings. The Warlis made this kind of art was well.

“When I participated in the Artist in Residence program here in 2018, I created a piece that looked like two overlapping nets. It was meant to represent the two-way exchange of cultures between Awashima and the Warlis. 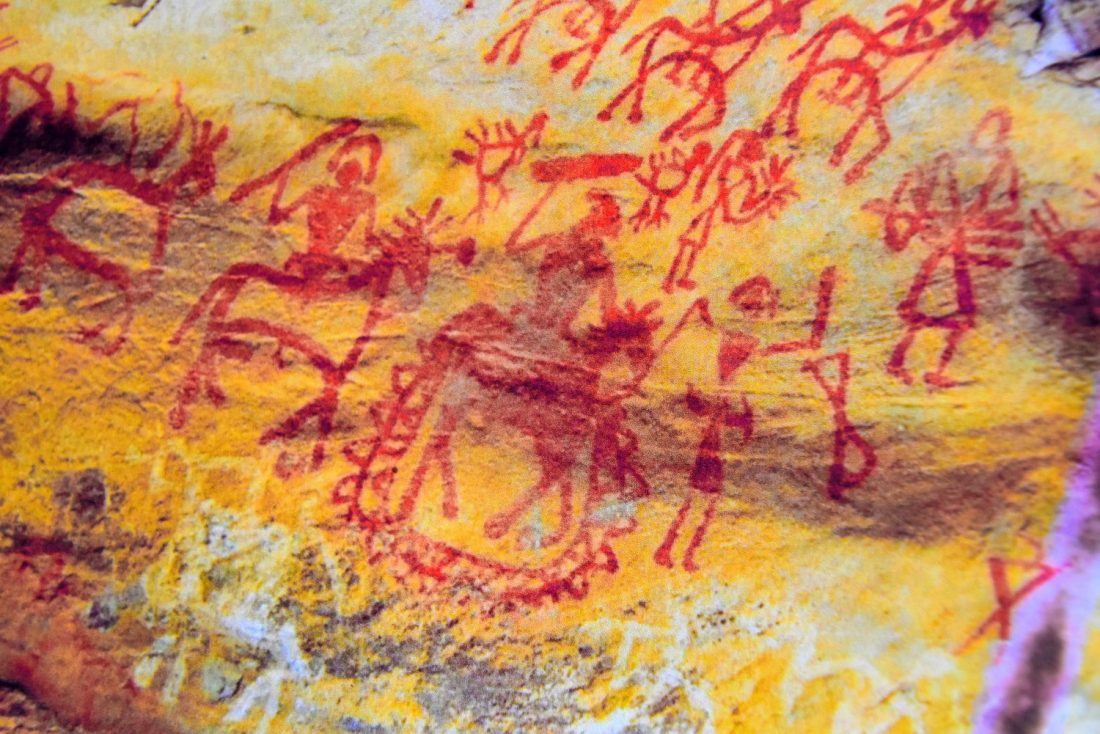 When people still primarily lived in caves, there were no defined countries. Now, we are all divided up into different countries and groups. I want my work to get back to the roots of humanity and that unity of experience.

These ancient people were able to communicate without language. I don’t speak much Japanese, so living here I understand what that must have been like and it feels like I’ve returned to that ancient lifestyle in some way.” 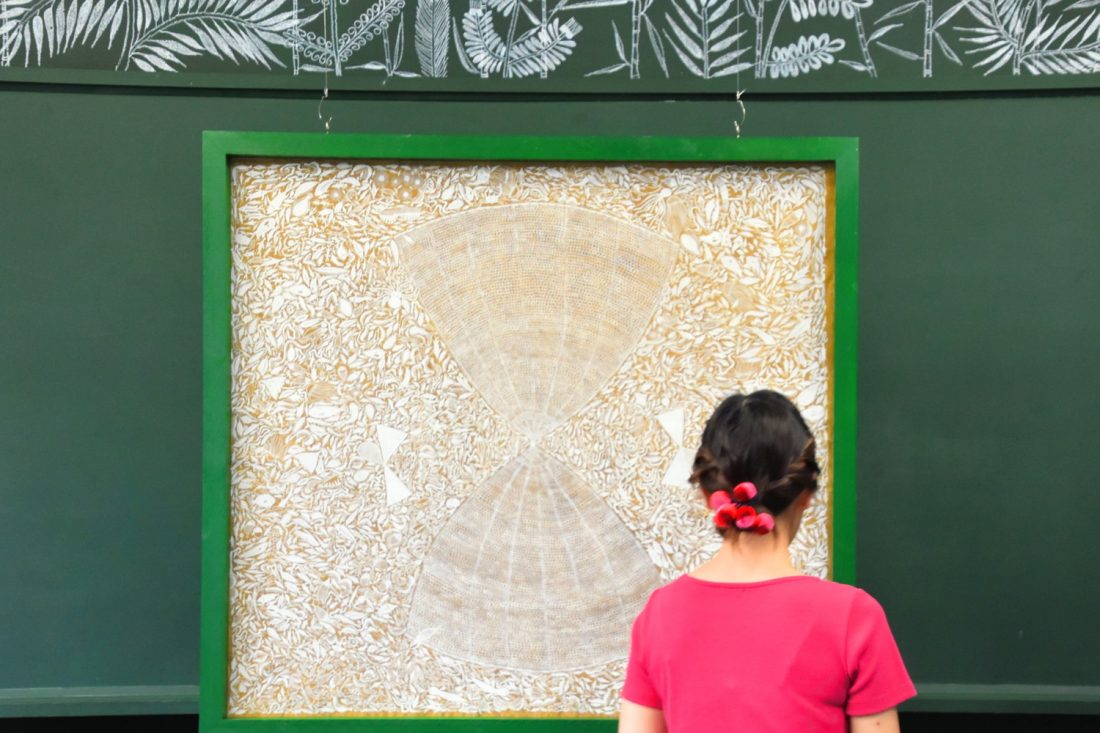 A piece created on Awashima Island in 2018

― Warli painting is characterized by geometric plants and animals, but what do you think are the unique features of Warli painting?

Mayur: “The Warlis don’t say paint, instead we say that we write pictures and paintings.

“We have our own language, Varli, but it doesn’t have its own writing system. Instead of writing letters, we write pictures to save knowledge and pass it to the next generation. That’s why when I write a picture or painting, I want to include a story to pass on.

“In addition to Mitoyo, I’ve also stayed in Inawarashiro, a town in Fukushima Prefecture. I’ve noticed that in both Japan and India, most young people don’t know the ancient history of their home.

“Actually, I didn’t begin to write paintings until I went to the city to continue my education. While I was there, I realized what a rich culture we have as Warlis, and I wanted to start writing these paintings. 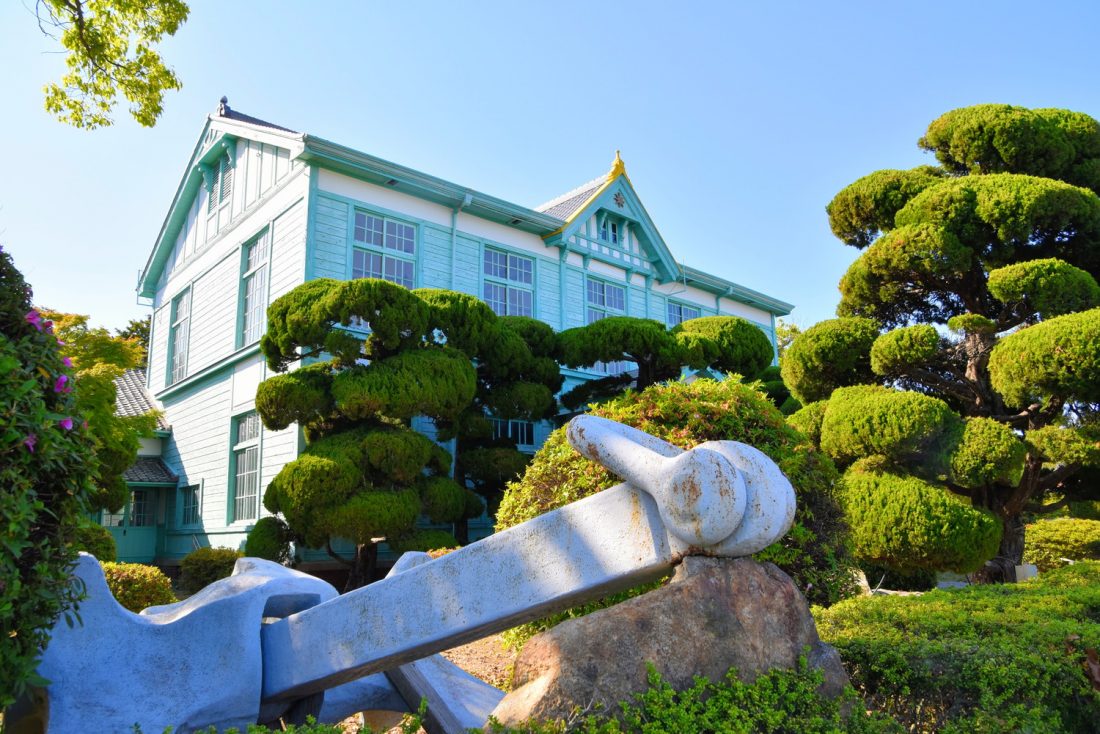 Awashima Island’s maritime school, opened in 1897. It is now the site of the Awashima Maritime Museum, and is open to the public.

“Awashima Island has a lot of history. On top of being the site of Japan’s first maritime school, the elderly people in the island can still remember World War II and the dropping of the atomic bombs on Hiroshima and Nagasaki, as well as natural disasters like typhoons and tsunamis.

“I think it’s really important to preserve these memories and pass them on to future generations. I hope my art can be a part of that process.”

Learning to Live with Nature 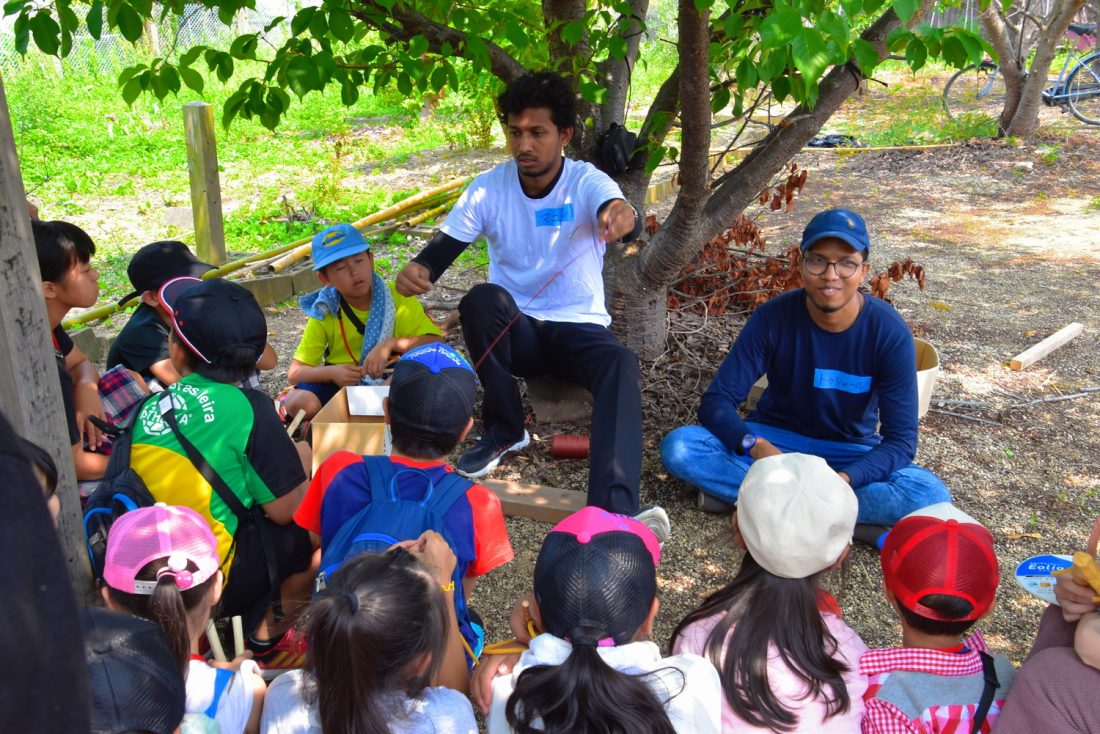 A slingshot-making workshop from June 2019.

Mayur: “In both Japan and India, children don’t have many opportunities to experience nature of the traditions of their region. Especially in cities, people are crammed into such small spaces and don’t often go beyond their home, school, or office.

Children test out the rocks they’ve selected in their newly-made slingshots at Mayur’s workshop.

“I grew up in a dangerous jungle. I think that it’s because of that that I’ve been able to face the work without fear. I want to teach other people the things I learned from that experience. The topics of the two workshops are the result of that desire.”

―The children seemed to have a great time at the workshop. I think that this workshop will encourage them to seek out other, similar experiences. Thank you so much for talking with me today.

Some of Mayur’s artworks will be displayed during the Fall Expansions season of the 2019 Setouchi Triennale. Visit Awashima Island to discover what stories are within his art for yourself!

For more information about the Warlis, check out Mayur’s homepage.